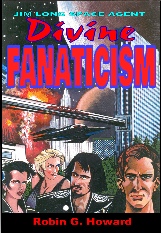 The planet Thraeot now reaching the nuclear age is flung into disorder. In a cunning disguise, Jim and crew sent on a dangerous mission revealing a deadly atomic conspiracy.

Jim and crew arrive in a unique disguise allowing them to enter all regions of the planet. The trail led to a council of members dedicated to complete religious domination of the planet and had manufactured a mobile atomic weapon. Following the clues leads to a massive building on the edge of a desert used as a training complex. The advanced technology of the agency operated by Jim intrigues one member of the religious leaders as other planetary agents converge on their position. In the midst of all this comes discovery of a craft three-thousand-years-old questioning both the Police Agency and planetary religion.

Will Jim be able to find the bomb before it explodes, and what is the secret of the strange ancient craft?

Please note that all ebooks & Paperbacks are sold on the Jim Long site and Amazon. All books on this site are purchased through Paypal with credit or debit card & this site does not see or deal with any bank details